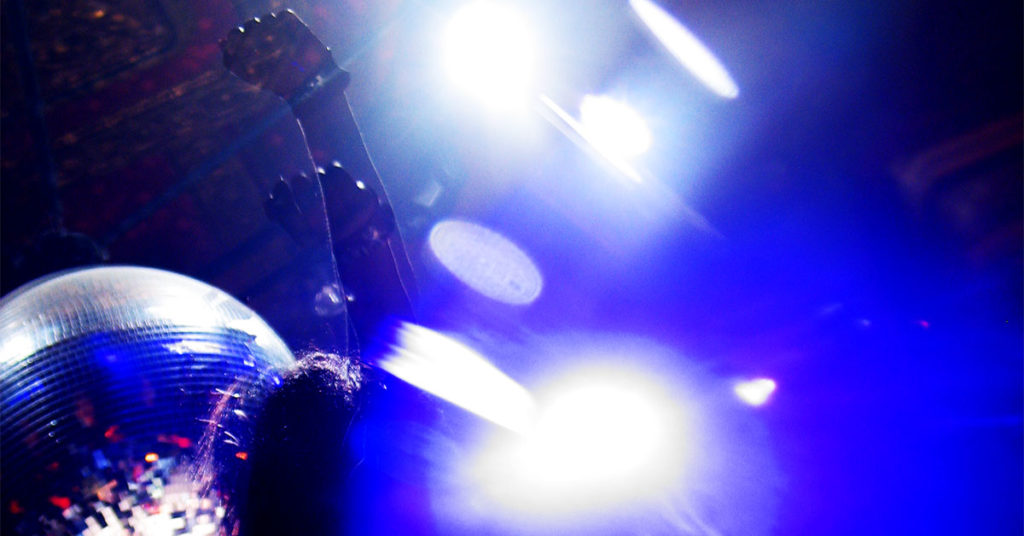 The Conga Room is co-owned most notably by Jennifer Lopez, Paul Rodriguez and Will.i.am and is located in LA Live near the Staples Center. I’ve never spent time at LA Live and I’ve never been to the Staples Center before. I never really had a good reason to go and it wasn’t really my thing to go clubbing or go to the multitude of loud sports bars or the Wolfgang Puck restaurant. None of those have ever appealed to me.

My friend, Blaz Gallegos, was invited by an old Dj pal ( Orlando Palomo) and brought me along with him to somewhat teach me what the true essence of House Music is. Something of a territory I was unfamiliar with. When we arrived at the front of the club they had a large line guided by velvet ropes and bouncers dressed in black with ear pieces on to communicate to the other bouncers on the top floor. This place was no joke. Blaz and I went to the very intimidating man, Mr. Scary, dressed in black with a very serious expression on his face to tell him that we had an invitation. The bouncer, without looking at him, stood to the side while he called a guy on the top floor to escort us to the club through his radio. ‘What is happening?’ I thought, and as we were waiting, the line was getting increasingly longer and two middle aged latina women came up next to us wearing tube top dresses they were pouring out of, who had invitations, as well. Blaz was quite friendly to the two women and was chatting them up and he seemed like he was really enjoying himself. He was in such a good mood. 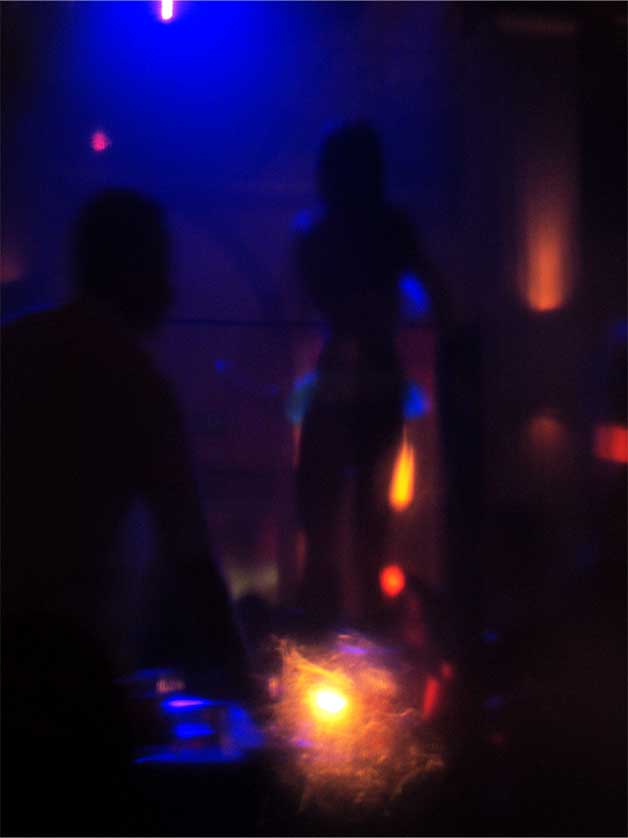 When we finally got the signal from the bouncer up stairs we got on the escalator and headed up to the club. We had to wait a little because a mass of people were getting their picture taken at the entrance. Much hysteria was happening but for what I couldn’t understand. Blaz seemed like he was having such a good time and had a smile on his face and chatting with the multitude of bouncers and hostesses and taking in the whole scene like it was the best place to be in the whole world. I, on the other hand, remained relatively silent thinking what the fuck I’m doing here.

When we entered the club there was a huge dance floor coordinated by more velvet ropes and bouncers constantly patrolling and keeping the place secure at what looked like could be a very rowdy and hostile crowd. I noticed I was the only white person in the place which I really didn’t mind, being the black sheep. We went to the back of the club to where the VIP section was where we had reserved seats and a higher view of the whole dance floor. The music was incredibly loud and the place seemed a little too well lit. “It’s to keep the place under control in case there are fights.” Blaz told me. “Oh, okay. Let’s get a drink.” I replied, yelling into his ear. He gave me a nod and we headed to the bar. Once we were at the bar he looked at me and said, “Hey, I took some acid. Do you want some?” As he has it in his hand ready to hand it to me. I said, “I don’t know. I don’t think I should, you know I have to work in the morning and I’m just starting to have a good time.” He gave a look as if to say ‘Hey, I really don’t care if you take the acid or not. Life is awesome!’’ I put the acid in my pocket and yelled, “I’m going on the balcony to have a cigarette!” He nodded and I went out the door with my drink where it was quiet. I lit a cigarette and gazed at the plaza below where it was desolate and I could find some peace. This place isn’t so bad, I thought. The thought of the acid in my pocket never left my mind and I knew it never would. Then, those two terrible words entered my mind. ‘Fuck it’. I discreetly took the paper out of the little baggy and looked around and placed it under my tongue. 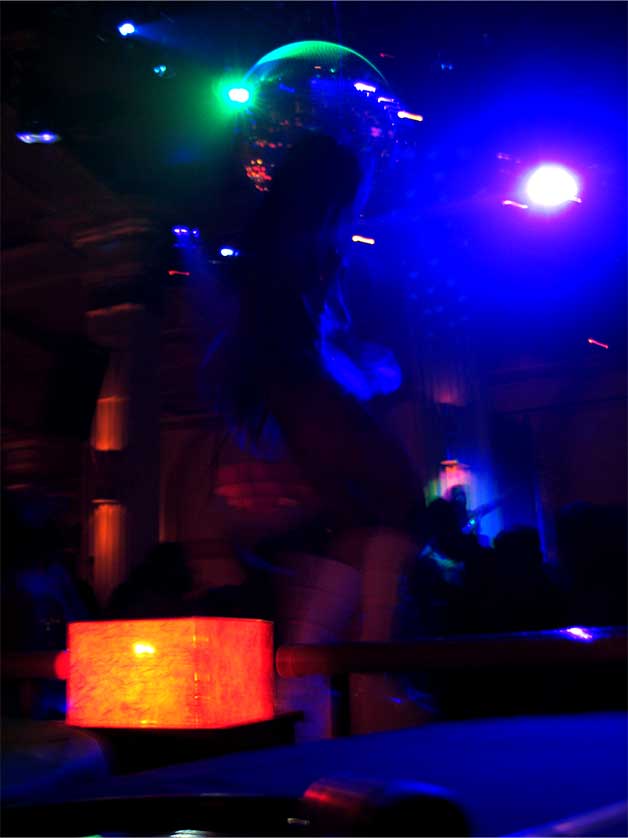 In the main dance space the dj was mostly playing top 40 and typical club shit but in another, much smaller room inside the club, there was a dj who was playing mostly 80’s stuff that was danceable.  Especially for someone who has my sensibilities. He was the one that had sent Blaz an invitation and I started dancing my little ass off. An old cougar walked up to me and brushed my hair out of my face and kissed me on the lips and I knew I was in for a great night.

The DJ switched it up to some Classic House Music. I knew Blaz was peaking because he kept insisting the photos he was taking were upside down. “The pictures are upside down!” he kept yelling to me. “I need to go to the bathroom and splash water on my face!” I nodded and decided to go outside to have another cigarette. When I stepped outside I thought to myself, “Yes, I’m tripping… Shit.”

I walked on the other side of the large balcony where it was quieter and with less people and I passed by a woman who stopped me and said in a very forceful tone, “You’re cute. What’s your name?” I stopped and looked at her and I didn’t really want to tell her so I asked in a soft tone, “What’s yours?” “Bianca” she yelled. I then told her mine and after that I walked away to the place I had my mind set on, far away from the noise. I lit a cigarette and a guy came up to me and immediately started talking and saying things like he wanted to fuck some bitches tonight and how he’ll steal someone’s bitch and not even give a fuck. I had no other option but to nod my head and agree with him because the last thing I wanted at a place like this was confrontation. He was one of those guys that looks at his reflection in every storefront any chance he gets and spends hours at the gym trying to pick up on “bitches” and has nothing but v-neck t-shirts in his wardrobe. I stood quietly leaning over the balcony staring out at the silent plaza of LA Live below until the guy went away. When he did, the girl I met earlier, Bianca, walked next to me and stood leaning over the balcony as I was and lit a cigarette.

“I thought I was doing a good job hiding it”, I said.

I looked out of the balcony to the plaza below and stared at two teenagers walking in the empty plaza holding hands. They seemed to be on their first date. The silence felt increasingly uncomfortable as she stood next to me and remained to glare at me. It was obvious what she was doing. She was flirting with me.

To break the silence I turned to her and said “I’ve been reading a lot about existentialism recently.”

She had a somewhat astonished expression and I really didn’t know where to go on from there. I was in shock as well. The fact was that I may not have grasped the concept of existentialism in any coherent fashion or even knew how to properly talk about it. I was just reading a book on Sartre.

Luckily, she liked to talk and said she teaches at a college somewhere in the IE and seemed to be really passionate about it and enjoyed learning academia. I unintentionally peaked her interest but what I really wanted to do was leave. The feeling was strong in me to escape and I’m not entirely sure why. She was a sweet girl and fairly attractive for her age, early 30’s I’m guessing, and just as lost as I was. The only difference is she wasn’t really high on acid.

I became horribly involved in our conversation and with such intensity that I felt we were in a bubble, worlds apart from any noise and talk around us and I began to sink further into despair. The feeling of isolation in a crowded atmosphere and the ramblings of a girl who’s telling you of her frustrations of finding a guy that isn’t a douchebag and is trying really hard to be charming seemed all too much. 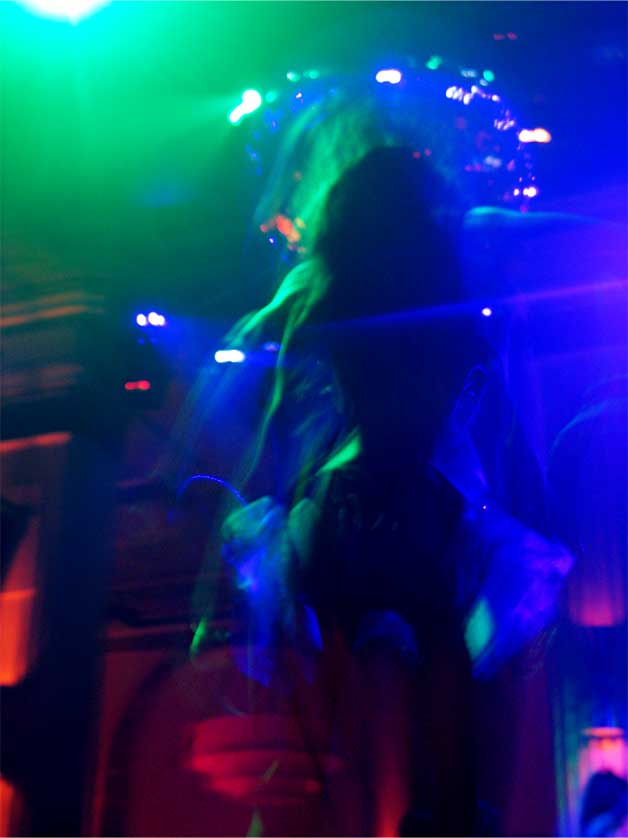 Bianca dove head first into existentialism and how no one is born with any essence or meaning. She said we go to places like this to try and distract ourselves from our own mortality and there is no meaning to anything we are doing. She was reading my thoughts. She was a mirror. Somehow the conversation turned to sex and she had mentioned where she lived and the thought entered my mind ‘Are you going to go home with this girl?’ I couldn’t, so I abruptly and very uncharacteristically to our conversation said, “ I must find my friend.” and left her on the balcony. Her, now lost more than ever and in the midst of the sea of guys who are out to steal other people’s bitches. She was too much like myself and it was something I needed to run away from 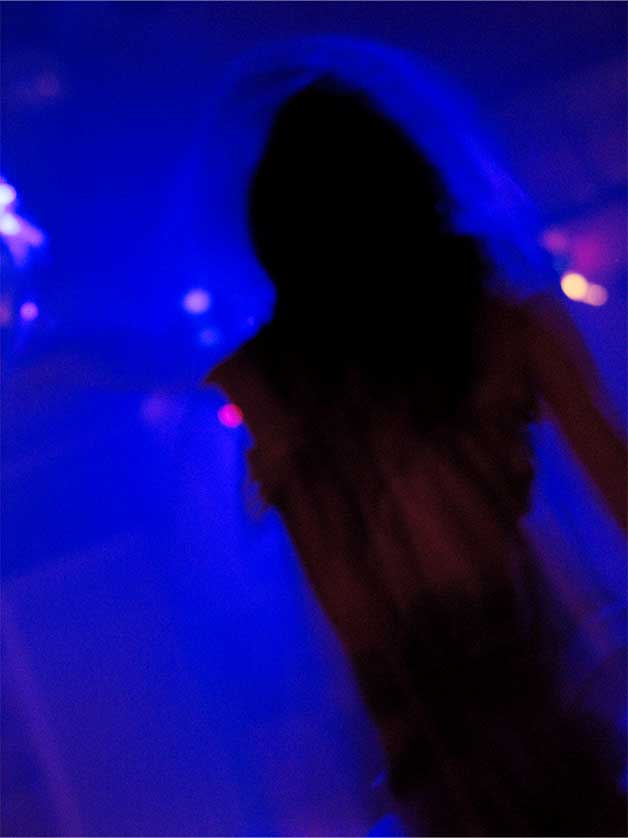 I went back in the club to look for Blaz. It’s strange but I never have a hard time finding him no matter how big the clubs are. He always instinctively has his back to a wall or somewhere with a vantage point where he can scan the crowd.

I spotted him and ran up to him and felt such relief. I don’t know what he was going through when I was gone for what might have been a half hour or hour but it was nice to see him.

“I was outside talking to this girl. Do you want to leave?”

The ride home was pleasant and quiet. The radio was on KJAZZ at a soft volume and I listened to him talk about what it was like to dj in the House Music scene in Phoenix in the 80’s. He seemed really passionate about it and I loved listening to him.

That night I lied in my bed in the dark and with my eyes closed, I painted landscapes in my mind and thought of poor Bianca. Despite an awareness that most people don’t have or choose not to have she’s still trying. Wandering around in this purposeless world and going to huge clubs owned by famous celebrities to try and meet someone who isn’t a douchebag to her. I wish her all the best.