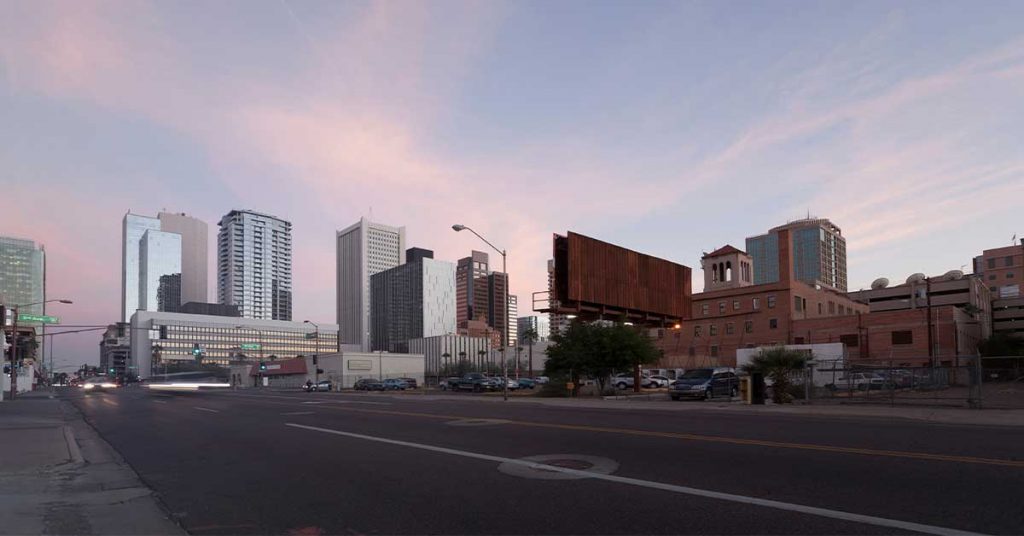 While clubs in New York, Miami and LA were rocking out to Chicago’s “Look Away” and moving to Billboard’s top 100, keeping their glam-rock big hair big, something new was baking under the Phoenix sun. It would mark the end of the nightclub as we knew it and start a revolution in parties and cross-cultural genre mixing never before seen by and even less accepted by the mainstream. It was the birth of the death of  “normal” and amped up the event game around the world. It was the Phoenix Underground.

In a near-abandoned, industrial neighborhood a new movement rose from the ashes of Top 40 banality and sparked new life into a desert city mostly known for family men whose names ended in vowels and a great place to score anything from crack to meth, cheap. Protected by a barrier of empty warehouses, vacant lots, drug addicted prostitutes and homeless people, only the most adventurous music and art lovers would converge on a small warehouse at 800 West Madison St. which would become the main cathedral for the Church of What’s Happening.

Many of today’s well-known DJ’s attended monthly mass in that dusty abbey where hymns of praise were sung by house, disco, rock and funk angels through the mixings of Blaz Gallegos, Chris Flores and Eddie Amador. In attendance were some of the upcoming DJ’s who would later shape the  electronic dance culture Z-Trip and Sandra Collins and Markus Schulz. These parishioners were lead in a choir heard around the world by one man who wanted to combine full room art installations with the new underground dance culture, Blaz Gallegos.

In this series of interviews, Blaz will detail his journey of triumph and betrayal, fame and forgotten, love and the depths of despair. His vision changed the clubbing and event world forever and he is now willing to share the lessons he learned with aspiring promoters and DJ’s, and anyone who wants to amp up their game.

Getting Started with Peter Patrisko

Back in 1989, I was DJ’ing at Club Bongo. It was a cool gig I was getting paid to play Top 40 and alternative. What I really wanted to do was take what I had learned in the LA underground at places like The Dirt Box, Scream, Glam Slam and Power Tools and move it up a couple of notches. My goal was to combine the art world and dance world into one full experience. My competitive side wanted to create events that would make the LA people come to my events.

I knew that I had an audience, but I needed a venue. I caught wind of events being held in art galleries in Phoenix – nothing huge, and barely drawing any attention. But never before had anyone brought a DJ to a Phoenix gallery opening. I knew that this was the way I could get artists who had the space to show their work, but no crowd coming to see it.

I met some resistance –  “Why would anyone come to an art gallery to listen to a human record player?” My answer – they wouldn’t. They would come for the art but stay because of the music. Remember that back in 1988 (Phoenix of 1988 nonetheless) no galleries were hosting events, and if they had an opening there was always some band playing. A DJ at a gallery was considered low-end, a soulless and uninteresting human jukebox. But I kept networking with local artists who wanted to show their work as they wanted to, not as the galleries did.

I was introduced to Peter Petrisko, a local artist and artist’s rep. Peter also saw DJ’ing as an art form in itself and would do anything he could to help. We exchanged numbers and “would keep in touch”. Oh well, another dead end lead I thought. And I was dead wrong.

Two months later Peter called and asked if I still wanted to do an event. I told him I had people ready to go, but no place to go to. Peter just spoke with the owner of a warehouse at 800 West Madison St. and said we could rent the space, dirt-cheap. Of course it was dirt-cheap, cops wouldn’t even go into that area. Peter didn’t care, he knew that for some people that was half the charm. We would share the space on alternating Saturdays – twice a month would host his events, the other two would be mine.

After months of organizing, networking and convincing people to show at my events, it was finally going to happen. I loved the space –  downtown, dirty, grimy abandon looking it was like the spaces I went to in Downtown LA . I could finally do what I wanted and put on an event Phoenix had never seen before. It was my time to shine, and I was terrified.