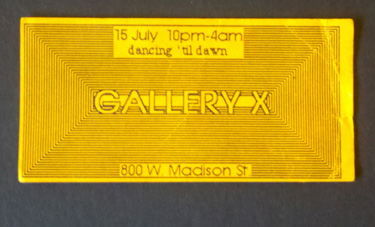 Months of planning and networking have paid off, and Blaz Gallegos is about to kick off the Phoenix Underground with his partner Peter Petrisko. It didn’t go as well as planned – it was better.
Something was changing, something beautiful was happening in Phoenix and it was happening at Gallery X.

BLAZ:
After months of talk I had to walk the walk. I had become the de facto organizer/promoter of the event. The artists had their pieces ready, we had a space; I even had Chris Flores ready to DJ. Everyone was waiting to see how I would pull this event off, and I really didn’t know. I was so busy building, organizing and planning that I didn’t even have time to print fliers. Hell, I didn’t even have time to name the event! I thought I had bit off more than I could chew, but I was going ahead with it anyway, even if no one showed up. And cue the panic…

What I really admire about Peter is that he worked like a machine. He had a goal and never got sidetracked by anything, the epitome of grace under pressure. No name for the event, no problem. He suggest using the name that he created for the space, “Gallery X.” Brilliant! And so was named our first event, Gallery X. He designed some fliers (which were business cards)  and I printed them out. Over the next week I spent almost 6 hours a day handing out cards .

Peter’s forward thinking was most reflected in his selection of artists. He liked avant-garde artists but to an extreme that most artists would shy away from. For example, Gallery X showcased works inspired by John Wayne Gacy. Although most of the people I told  this to didn’t like the idea, I thought it was amazing. Perhaps that is what made those events what they were – I was pushing the dance culture and likewise Peter was pushing the art world, together we were making people feel very comfortable with feeling uncomfortable.

Friday night was Peter’s opening, with my event the following night. Peter had found a performance art troupe out of Minnesota (yeah, that’s not a typo) as the gallery’s main work. The leader of the troupe was bald and had a life-sized tattoo of a brain surrounding his head. A little more extreme than my uncle’s teardrop I must say, but pretty damn cool and it set the stage for that weekend’s festivities.

The next night we were on. Chris had spread the news through his network of club goers and dancers at local nightclubs and so even more people than we expected showed up, and the people that came got a lot more than what they expected.

Chris and I were well connected in the gay community and promoted to them. Being 1988, they were more than happy to come because we were the only underground club event at the time. They also brought their friends – female strippers that only felt safe going to gay events because no one would hit on them. (In the underground people go to dance and they let others dance. Unsolicited rubbing up on a stripper is not cool). Clubs closed at 1:00am at that time,  so by 1:30 in the morning, we had about 40 strippers who just got done dancing for money. Now it was their time to dance for the fun of it, for themselves.

The party was packed at 2:30am. The strippers had loosened up the crowd and then the Minnesotans showed up and took the party to the next level. The completely naked troupe of one woman and two men had covered themselves in white powder and begin writhing on the filthy, drink and sweat-slick floor. Within a few minutes, the two men started having sex with each other. It’s Phoenix. It’s 1988. Not a typical thing to see, even for the gays that were there. Soon the woman joined in and a full-on, no-holds-barred menage-a-trios was thrusting and humping to the house beats. Now that’s performance art!

Chris and I didn’t mind too much, and the people were too busy in their own escapades to fully notice. When I think back, Phoenix was still very segregated at that time. West Side car-show DJ’s would not be caught dead associating with gays. Blacks had their clubs, whites had their live rock or alternative events and Latinos had their night clubs. Our events were the first ones to bring it all together under one roof, where everyone would dance together, share a drink and make out without any judgment. Straight and gay people were dancing and talking without fear of what someone would think. Horny young men kept their cool around half-naked undulating strippers. There was respect for other people regardless of their differences. People came just to enjoy other people, plain and simple.

And so began the underground House Music scene in Phoenix