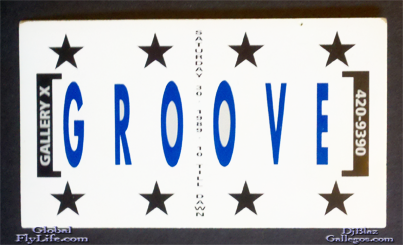 Part 03 | Welcome to My Groove

Gallery X had been a huge success and made Blaz and his partners instant celebrities in the event and party world of Phoenix. Not one to rest on his laurels, Blaz went ahead and turned the Phoenix Underground on its head – again.

BLAZ:
After the success of Galley X, I decided to make Chris Flores a partner. We knew we had started something different, something that was breaking the mold culturally and socially. I knew we could bring in the crowds and dazzle them with an event no one had ever seen before. My goal was to make Phoenix a global hotspot for events and parties, but to do so, we had to consistently out do ourselves with each new event. This mentality kept us successful and popular, and I believe is essential for anyone in the music industry from DJ’s  to promoters. I got to work on making the next event even bigger than the first . Now we had our own vision and style and we wanted the next event to reflect that, so we chose the name “Groove”.

We divided up the responsibilities according to what each of us did best. I was in charge of visuals and logistics, and Chris and his girlfriend at the time Sandra Collins (yes, that Sandra Collins) concentrated on promotions. We also bought in two other people to help promote who through out became a major contributors to the success of the underground TALL PAUL and Samir.

I wanted to do something nobody had seen, something that the folks in LA wouldn’t even consider possible. To do that I had to get my hands on original art, things that no one had ever seen and more so, pieces that would be created with the theme of specific events in mind. I was creating exclusivity, so that each event would be entirely different from the previous. I wanted to build a sense of awe and expectation in the people that came and a feeling of regret for those that missed it. 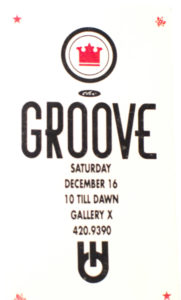 I went to local artists Jeff Folk and Marilyn Szabo to create the artwork. They were up-and-coming in Phoenix but also understood the value of creating something outside of themselves to help spread their name. One big lesson I learned in creating Groove was to always bring in fresh faces and make them the stars of the event. What you give out, you get back.

It was important to me that the artist’s work was the main focus. The music and the special effects were there to compliment the artwork. So for the first Groove, I created  light sculptures that accentuated the artwork and also lit it along with the dance floor. I wanted to create and environment that took people out of their ordinary, mundane existence and thrust them into a new frame of mind, an alternate reality. It’s like Disneyland. The genius behind the park’s design is that it’s one story below street level so that patrons can’t see outlying buildings, giving the impression of a world outside of daily reality, but just as realistic. That’s what I wanted for Groove, to create a separate world where people would be transformed into the most powerful thing on the planet – themselves.

To bring them into that world, I always used the back alley as the entrance and used black plastic as a maze to enter the main gallery, which was also the dance floor. The lights and artwork were a great contrast to the journey someone took to get to the main room. I would keep the lights on and play funk and rare groove for the first hour, then at 1:00am Chris would go on and I would turn every light off and have the crowd in complete darkness for the first two or three songs, progressing the crowd further away from the outside world.

There’s an old saying in real estate – location, location, location. Groove was in the perfect part of town to give people the sense that they were a thousand miles away from home, somewhere few people dared to go. We were in the heart of skid row and our next-door neighbor was the St. Vincent de Paul Society, which provided food and shelter for the homeless. It also provided for some interesting conversations for the people that were waiting outside. There again, two different worlds getting together in harmony – the kids from Scottsdale, Mesa, North Phoenix and Tempe all mingling with Phoenix’s forgotten population, and sometimes even sneaking some of the homeless guys a drink or two just to be nice. 800 West Madison was indeed a world away from what most people in Phoenix had ever known.

The warehouse party was already a popular thing in LA, New York and Chicago where House music had been rockin’ since 1984. Music took longer to get to Phoenix, so when we started spinning house, people were floored by it, they just loved it. Groove was a totally different kind of party for Phoenix. The location, the local “citizens” and a start time of 12:00am all contributed to the freedom people felt at the event to be themselves regardless of age, sexual orientation or culture. People came to experience art in a new way and were bound together by music that moved the soul.

The lighting and the sense of belonging gave some people a greater sense of freedom than others. I was married at the time and so I wasn’t very aware of or did I participate in this kind of “freedom”. Many years later I learned that people would sneak behind the bar, tuck into the darker corners of the gallery or hide in the anonymity of the sweaty bump-and-grind of the dance floor and get their own groove on. Let’s just say a lot of late teens to early twenty-somethings in Phoenix owe their existence to a night at Groove.