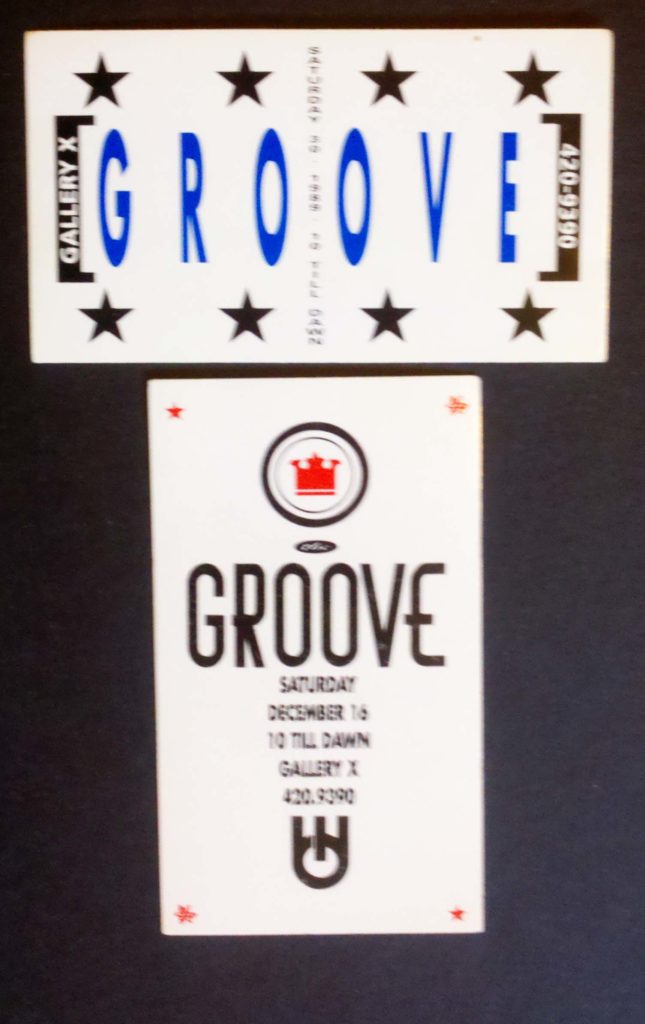 Groove was now the epicenter of the underground that was shaking Phoenix culturally and socially. Events were getting bigger and more elaborate and started attracting party-people from Los Angeles and New York. Blaz reflects on how the biggest challenge was to keep the events consistently more interesting than the last.

Blaz:
I realized that Groove wasn’t just staying ahead of the curve, it had become the curve. People from all around the county were coming to the events and word soon spread to LA that something different was going down in Phoenix. I had to make sure that my cocktail of art and music was the right mix and shaken up just enough to give these people the rush they wanted.

The art was always new. I had built quite a network in the Phoenix art scene with local painters and sculptures always willing to contribute their work to an event. The music too was drawing an eclectic crowd with Chris Flores spinning Detroit-Tech and early House. Every now and then I’d step in for a half-hour and rock out with some Disco, Funk, Soul and Hip-Hop. It would seem that these styles would not mix (especially in the late 80’s) but we were able to satisfy the curiosity of people with the latest grooves and give them something they loved but in an entirely new context. Although people came for the art, eventually the events were known for the music, drawing in even more people.

In essence, all I was doing was trying to outdo myself! I knew that if I could impress myself with what was going down in a particular event, other people would be floored too. The secret I feel was context – the art being juxtaposed with light and sound that would change the viewer’s experience and point of view into something they hadn’t experienced before.

When I think about it, Groove did three things that no one else was even close to doing in Phoenix at the time. Firstly, it was communal; open and accepting of anyone that wanted to have a good time. There was no bouncer checking to see what you were wearing or judge you by the color of your skin. White, black, Latino, straight, gay, punk or prep, everyone got along and simply enjoyed the company of people that they might not get to know outside of the gallery walls. At Groove everyone was equal, loved and respected.

Second was the lighting. Believe it or not, but the way an event is lit has a lot to do with how people responded to it, but more importantly to each other. The brighter an event the more reserved it would be. Magic happens in darkness. It gives permission to people to be themselves, to freely express themselves in movement and not fear being judged. You couldn’t see color or how trendy someone was dressed. All you had was a shadow moving like you were, an instant connection through the body’s rhythm. At Groove, it was OK to “explore” in the darkness and be who you really were.

Third was the music. Nowhere else in Phoenix would some one be able to find the eclectic genre mix we had at Groove, allowing people to see that music is just music. It’s all-beautiful in its own right and if you let yourself go with it, you’ll discover things you never knew musically existed. It’s a wonderful thing to see a white head-banger move in perfect time to Juan Atkins, Sylvester, McShante and Kevin Saunderson and actually love it.

It was these three things that kept pushing me to do something completely different each time and from the other events I’d go to or hear about. When I came up with event ideas if Chris or any of my friends said “Cool, they’re doing something like that in LA, NY etc.” I’d scrap the idea and start from zero. I was determined not to copy someone else. So, I always knew what I wasn’t going to do, which meant I was usually doing something 180º different from the rest of the country. If certain beats were getting popular, or a particular lighting style was gaining interest, I found new music and developed new lighting schemes. But there was always this little crow pecking the back of my head, cawing “Is it good enough? Is it good enough?” I didn’t have to wait long for the answer.

Years later I found out that Groove was bringing in folks from LA, NYC, San Francisco and Chicago on a regular basis. When I found out that a group of artists that I had seen at a few events had come all the way from the UK I had to ask them why they came to Phoenix. These party-people said they haven’t been able to find anything like my events anywhere in Europe or the US. I then knew I was doing the right thing, and that I had found my Groove.