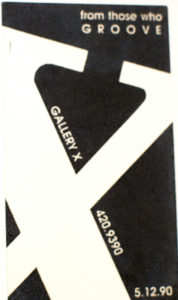 At the end of 1989 Groove had reached international recognition in less than a year. It was a party for all social types and orientations hidden in the squalor of a forgotten part of town. It was perfect. But what was it that made it so different? What made the events seem magical? Is it a matter of simply doing the opposite of everyone else, or is there some other twist to Groove’s success? Reflecting on his favorite events, Blaz will reveal his secrets to making each event better than the last and keeping people guessing as to how he did it.

BLAZ:
I couldn’t have asked for a better reception to Groove. People were coming from all around the world and the word was that there was nothing else like our events anywhere. Sure LA had its warehouse and gallery parties but our combination of music, art and presentation was unique.

I knew that Groove had to be taken to the next level. But how do you keep amping up your own game? I just knew that I had to impress myself each and every time, but the one thing that remained consistent, that gave our events the magic others were missing was the presentation of the art work being a piece of art in its own right, changing themes and the fact that the event was a complete installation on its own. LA and NY would set aside an area for a dance floor and a DJ booth with the art on the side. I made sure people were immersed in the art, moving among it and with the lighting displays actually becoming a part of it. People were part of the display and became the art.

This attitude is what drove our “brand” if you will. In 1990 Chris had moved to LA and out of respect to him and as not to brake a golden rule of the underground (use a name someone else created), I created a new series of events. As I was in a state of constant innovation and never repeating myself, I looked everywhere for inspiration, but the greatest variety came from the most least expected source – the alphabet. Yep, that simple. I used the letters of the alphabet to inspire my next series of events I now refer to as “The Letters”.

The first letter was “G”, 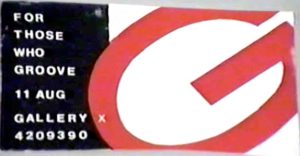 for It was an Obe to Groove and the moving on of Chris Flores. This was the first time that Eddie Amador DJ’d one of my events, but more about him later. (That’s a story all in it’s own)

Next was “X”, partially as a nod to Gallery X (which got us started) and also for Generation X. So really the theme was the unknown, the X factor that makes things happen, that makes us all unique. To keep the theme in the artwork, I teamed up with John Wright who had a lot of connections at Arizona University’s Art Department and inspired the students to come up with artwork featuring the letter X. I also knew a lot of artists through the International Students Association (ISA) and so I pitched them the same idea.

John took it one step further though. At an ISA party he took a piece of canvass and painted an X on it with fruit punch. He had a black marker that he would give people and tell them to write down a phrase or word that encapsulated Generation X for them. It was totally improvised art, inviting in the unknown to create a completely unique statement from unrelated sources. Bringing together what should not fit into perfect harmony was always my goal with the events, and John’s piece mirrored that perfectly.

To keep the theme of the unknown going, I crated a huge light sculpture with a bouncing X on it that would seemingly randomly appear and disappear. People would be looking at the art or dancing and just catch a glimpse of it, while others missed it all together. Eventually those that saw it even questioned if they had seen it or not. Groups of strangers spontaneously formed waiting to see the X flash on the screen. When it did, they roared with triumph. Instant community was created all because of a flashing letter. Gotta love that random X-factor of life.

Keeping with the letters, I moved on to “C” with my event Complimentary Contrast. I was always amazed by contrasts; light and dark, hot and cold, life and death – none of these could exist without their compliment.

I was truly inspired and amazed by a recent Brian Eno performance where he simply beat a wooden spoon on a metal pan for an hour. It was maddening to most but it hit me – repetition is a form of change. Again, opposites living side-by-side in perfect harmony, owing to each other their existence. That’s what I wanted in my next event.

I looked at extremes of light and dark. Where my other events had cool lighting with deep shadows and hues I decided to give the people two things – pure dark and pure light. When I say dark, I mean pitch black. There were no windows and the entrance was sectioned off with black plastic so that no light came in. When the music started, I turned off the lights and people went nuts. They loved bouncing and slithering in the anonymous black of true darkness. Then I’d flip on the lights, but not just any. I had massive blinking lights that were near blinding. When they came on people shouted and cheered as if released from the darkness and proud to show off who they were. It was wonderful to see that transformation.

John went ahead and created a huge installation by erecting a wall of TV’s and VCR’s that would show videos he made on a loop. There was barbed wire surrounding the wall and huge plastic sheets covering the screens the complete structure formed a huge cross. On the screens were images of wars and battles fought for the sake of religion. He was contrasting the peaceful message of the world’s religions with the violent reality of their followers.

This spirit of opposites and compliments was carried through with other pieces of art. Another artist curled himself up into a fetal position, completely naked while images of corpses came on some TV’s that were just behind him. Someone did a combination of Elvis in his prime and his bloated self at his last performance, all encapsulated into a rock-a-billy cat. I couldn’t have done better myself.