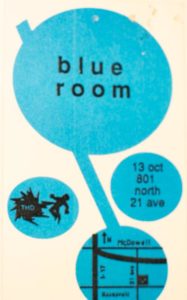 Blaz takes his discussion on inspiration for his events to the next level. His “Letter Series” was a huge success, and always being one to outdo himself, Blaz raises his events up an notch and looks to the spectrum for his next series.

BLAZ:
Red Room:
My events were at a turning point, becoming more popular than ever and the crowds were getting too big. It’s one thing to have a packed warehouse with people bumpin’ and sweatin’, it’s another to have them crammed in so much they can barely move, and still have a line of people waiting to get in. That’s great for a nightclub, but it’s a pain in the ass for an underground party. The lines outside were just screaming to the cops “Something’s happening here!” We needed a new space and we needed it quick.

With John Wrights help we found a new venue that could handle our crowds at 510 West Jackson Street. With a new space I knew people were expecting to be blown away – we moved for a reason, so let’s prove it. I looked to new inspiration to come up with themes. I talked with John and we used film maker Krzysztof Kieślowski as our inspiration. We created Red Room, the first color. 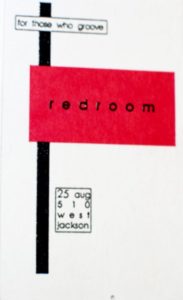 There were two great accomplishment with Red Room: One was that I finally mastered the art of hanging plastic. We’re talking huge 30’X30’ sheets. Although simple in concept, trust me, a sheet that big is not light, they will tear and fall by their own weight. I developed the renowned technique of bailing wire, sheet rock screws and never leave home without DUCT TAPE.

The other major technique I developed was cooling off a room (one that you should take heed of). I still implement this method at all of my events. Most people point fans at the dance floor or the most crowded areas. This just circulates body heat and breath back onto the crowd. Instead, I opened a door at the back and pointed the fan out. It’ll suck the hot air out and draw the cool air in from the entrance creating circulation and cools a room faster and longer than any other method you’ll find. At Red Room, the crowd was entering from the loading dock, so I opened the front and barbed wired the entrance with two fans pointing out. Do this, it works.

Scott Faust and his girlfriend built a massive scaffolding to display the art and visuals for Red Room. But be careful when doing something like this. Tall ladder-like structures are irresistible to drunken partyers. One guy climbed to the top and belly-flopped on the concrete floor (I actually caught this on video). I thought, “Fuck. He’s dead and we’re all going to jail.” But, he just got up, all smiles and climbed back on to the scaffolding to dance with Tall Paul and Sandra Collins.

But the scaffolding did serve its purpose. John Wright got a pop-tent and suspended it upside down from the ceiling with fishing line. He put a red flood lamp in the center and let the tent dangle and twist in the wind. With the plastic all around it, it looked like you were staring at some floating sea creature or alien who just came by to dance with everyone else.

The most impressive installation in my opinion was made by Scott Faust. Back then there was still controversy about the treatment of Vietnam Vets and their rights, which lead to a lot of flag burning. The debate was weather or not that was an act of treason, or to deny that act was against the right to free speech. Scott hung a huge flag and projected flames onto it. It was a very moving and though provoking image when contrasted with a hundred or so people dancing to funky soul and house.

Even with the music, Red Room was raising the bar. Eddie Amador was DJ’ing and would ride the line between House and Techno like only he can do. He also helped to raise my DJ game by bringing in DJ techniques from the world of the Latino Car Show. These DJ techniques reminded me of the unwritten DJ battles we have at events. At the time, it was en vogue to mix in vocals from movies, speeches etc. Martin Luther King had become a favorite sample, but I went in a different direction. I had a Richard Pryor record with his take on the The Exorcist, which was brilliant in a massive red room. Eddie played a ten minute instrumental House track and I dropped in my Richard Pryor. Richard Pryor, the devil, crosses and a ten year old girl. Shows you where my head was at.

Blue Room:
Next we did Blue Room Scott Faust really out did himself by projecting film loops of the movie Frenzy onto over-sized beds that hung from the rafters. Three firsts were accomplished at Blue Room. We had gotten so big we needed to rent generators. More money to be spent and more attention pointing our way.

The other was promotions; we promoted so much that radio stations showed up to broadcast live from the event. It was risky but it all went off without a hitch. Also, my now-ex-wife Frani DJ’d the event and the women loved it. You didn’t see any female DJ’s in 1990 Phoenix. Having her DJ just amped things up a bit, and changed the rules just a little.

Green Room :
Green Room was the last in the series and by far the biggest and most audacious to date. This was the first ever underground event held on Thanksgiving night. I thought by midnight everyone would be tired of hanging out with family and want something to do. We were growing again and so I needed to find another place. I was driving around the warehouse district when I spotted a tin warehouse in an otherwise vacant lot. I scoped it out and found out it was a water bed refurbishing company. Of course it’d be! Who doesn’t want a used water bed? I met with the redneck, trailer trash, twisted-tooth owners and we cut a deal. They were supposed to have the place empty on the day of the event. Instead just they just moved the water beds out of they way, but the place was cheap. Take note though – cheap and unsophisticated Phoenixians is not the best combination. Before the night even began, they were drunk and starting fights with each other. But that didn’t deter the crowd. The gate was getting crushed and the door people couldn’t handle the onslaught. I said “Fuck it. Let them in!” and so we were flooded with a crowd ready to party 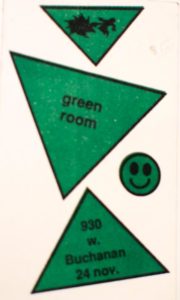 When they got in the saw one big green fog lamp hanging from the ceiling. That was it. Everyone else was doing elaborate and slick lighting design, so I did the exact opposite – one light, one color. But we took it up a level. Everyone got a metal, toy whistle to play with. We gave out over 100 whistles that night. Eddie played and when he spun the Hypertech tune with the whistle in it, all hell broke loose. Everyone blew on their whistles as hard as they could. One hundred metal whistles blowing at the same time in a huge metal box. To this day I still cringe when the referee blows his whistle at my nephews’ lacrosse games.