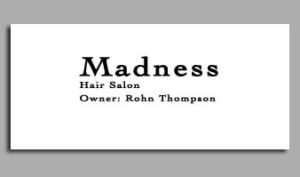 Every city has the place where the coolest, hippest characters go to hag out. For most it’s a bar, clothing store or record shop. In Phoenix, it was Madness Salon. Blaz tells us how this little island of hip and happening became the center of operations for his events.

Blaz:
In 1989 to 1991, Phoenix was about 2% cool and about three years behind the rest of the world. Trends in music and fashion seemed to fly right over top us on their way to and from LA and NYC. The major reason why my events were so successful had to do in large part with the unsolicited promoting that people did for us. They were just as much of the creators of the scene as there were a participants of it. They would pass flyers and get people to our events without us paying them or even asking them. They wanted the events to be a success as much as we did. People like TALL PAUL, Samir, Sandra Collins, Modelo (Raul, Jimmy), Joel and Jeffery and countless number of other party goers. And yes there was the forces to be reckoned with Madness Hair salon (Ronnie Thompson, Mark Parich, Annette , Adam and others) 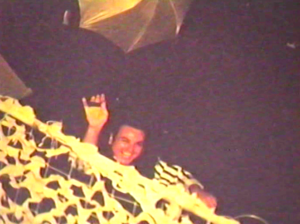 There was one place though that caught the fumes of cool as they flew overhead and safeguarded it in a small little salon called Madness.

Madness was my little get away where I could hang with like-minded artists. I owe a lot of my success to the passion and encouragement of those friends.

Madness was a daily party with a come-as-you-are attitude. People would show up just to chat and hang out. The owner, Ronnie Thompson was a larger than life, super talented and had a real love for life and people. He was well connected with all the clubgoers, gay community and artists that Phoenix had to offer.

If Ronnie came to your event, you were guaranteed at least 30 of the hippest, coolest trend-setters in the entire state. His presence not only brought a small party, joy and love, but major cachet! He and his crew would show up and the event immediately became their personal nightclub. Ronnie always came with the hottest girls and guys, dressed to the nines. And if his people liked your event, you were set.

Ronnie was also a very generous friend. I found out years later that he was one of the first people to get our fliers, but rather than have them sit at the salon in the hopes that some one picked it up, Ronnie would personally hand them out. And as soon as Ronnie knew about an event, his entire cabal of cool did too.

Now being that there was nothing else going on in Phoenix that compared to my events, Ronnie and his people would go all out. Three weeks in advance he and his friends were getting costumes put together, figuring out hair designs and make-up ready to party like it was the last event on earth. Later on Ronnie told me that days before the party his salon was packed! All the coolness in Phoenix descended on Madness to get ready for the party and only trusted the mayor of hip and happening with their hair. So he made a few bucks off the event too. I owe him that much at the very least.

Ronnie’s connections in LA, SF and NYC were part of the reason why my events became so popular on a national level. He invited people from all around to come to Phoenix and experience what he thought was the coolest shit he’d ever seen. And they came, in droves. They would arrive on Thursday and start partying that night at Prestons till Friday morning as a way of preparing for Saturday night’s event. Madness was the meeting place and by Saturday afternoon, as the last of the hipsters were getting ready Ronnie kept the drinks flowing and the music bumping getting everyone psyched. Come Sunday morning, Ronnie was the first to gather everyone up and go to Fosters for Orgy Sundays and just kept it going on.

Much Love to Ronnie and the Madness Salon crew…

Part 03 | Welcome to My Groove