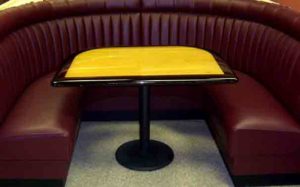 Phoenix has long been known as the winter home of “family men”. Blaz’s events were becoming bigger and bigger and certain individuals wanted to talk to Blaz about doing some business. Was this going to be the beginning of a beautiful friendship, or the end of all Blaz had worked for? There was only one to find out – go to the sit down.

BLAZ:
My events were bigger than ever, attracting hundreds of people every time and growing. After years of putting on events, they were finally turning a profit and I had a real business in my hands.

Other club owners took notice of us. How did they know about our events? We didn’t cater to their clientele, or so we thought. Eventually word had spread of the events and everyone knew about them. When the party goers went back to their usual watering hole, they talked up a storm about the party they had just been to. With the next event, they were gone, and so were a whole lot of other regulars. We were being noticed because we were taking away business from bars and nightclubs all around town.

I didn’t know this was happening until my cousin (a local bar owner) sat me down and told me to lighten up on the events. The other owners were getting pissed and would soon want to “meet” with me if they kept loosing business – or not being compensated for that, wink wink.

In plain speech, Phoenix was (and maybe still is?) a Mafia town. Not the Valentine’s Day Massacre kind of town, but don’t expect a meeting with Don Corleone if you’re trying to land a role in a movie. These guys are looking to make a buck like anyone else, businessmen, plain and simple. They just have a different way of doing business.

So one day I get a call from an associate of one Mr. Parmigiano Regiano (names have been changed to protect the innocent, and myself) and he’d like to have a meeting with me concerning the events. We’ll meet at Mr. Regiano’s restaurant, don’t be late.

Here’s the deal, I grew up in some pretty tough neighborhoods and seen some nasty shit go down. I wasn’t dumb enough to go alone or without telling someone where I was going. I called up Eddie Amador and asked him to come a long. I told Eddie, “They are going to either close us down, sue me (if they do they’ll get nothing cause I have nothing) or try to kick my ass.” He thought it’d be “cool” and so we went. Shit, they might offer us some lunch!

We get to the restaurant and walk in, telling the 6’5”, 350lbs. “maitre di” that we have an appointment with Mr. Regiano. He silently leads into the restaurant past a suited man at the bar who stares at us, then past some tables with more suited guys, just staring at us, none of whom were eating by the way. Yes, I was starting feel a little uncomfortable.

Finally we reach a booth full of fat guys wearing Hawaiian shirts and one regular looking white dude in a suit. He greets us and has us sit down. Then I got worried.

Unlike me, Eddie was not from the streets. He is an amazingly smart and fun-loving guy but doesn’t have a clue about these kinds of situations. He sat after me but positioned himself so that he couldn’t see my back or the door. We were in the prefect position for strangulation, being stabbed or a bullet behind the ear. But at least they did have some drinks for us!

So the white guy in the suit does all the talking as the fat men just watch, their eyes unmoving and calm. Suitman tells us that they know all about my events, where they are, how many people attend and that they are 100% illegal. These guys are from Chicago – they’ve seen the Ware House Underground Scene before and aren’t as easily fooled as the cops. Suitman says they have an offer for us – they have some clubs opening downtown, and they’d like us to promote them, do events etc. I had a feeling something like this was going to happen. I wasn’t going to let some white fat dude take all that I did (like so many did to R&B singers of the past) so I simply said “Fuck you.”

Eddie froze, waiting for the inevitable stiletto through the back and out his heart. Instead, one of the fat guys looked at me and said very calmly “I don’t think you understand. We’re going to shut you down.” I very calmly responded, “Do it.” Suitman regretted that we couldn’t come to an agreement and had the maitre di escort Eddie and I out. No razor blades, no garrotes, no taking a ride in blacked-out Crown Victoria. Movies lie.

So, the mafia was going to shut us down… I had some thinking to do and decided, “What the hell, let’s fuck with them!” Now I don’t recommend anybody fuck with the mafia, I just didn’t give a rat’s ass.

It was time for another event (Private Room), and we promoted like we always do. I wrote a poem to send with the invites (which was later hijacked by a good friend of mine who used it for the after hours clubs in LA — but who’s counting). Hundreds of people were coming, it was going to be massive. The fliers were out with one small detail – the address was an empty lot, on a dirt road, that divided Downtown and South Phoenix. Eddie and I watched from our car drinking beer and eating burritos four blocks away as police cars and helicopters descended in full fury on a vacant lot. Pochos 1, Mafia 0. 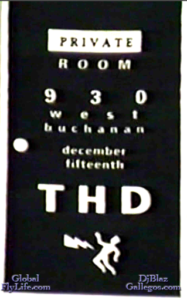