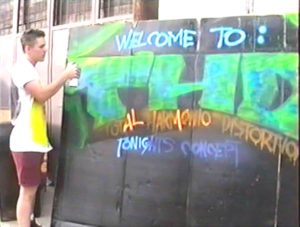 No one ever does anything on their own. If we’re lucky enough, we find someone who pushes us beyond what we could do and makes us better. Blaz had one such friend who helped to mold the vision of the events into what they had become.

BLAZ:
Of all the people who helped me organize and create the installations no one was more important to me than Mr. Lewis. He helped me to see beyond what I thought was possible and kept me amping up my own game to make each event better than the last. I owe him a debt of gratitude that can never be paid.

I met Mr. Lewis when I first went to negotiate gigs at Silver Dollar. Even at that first meeting I knew Mr Lewis was going to be a good fit for my team. When I first talked to him that day about some of my concepts he would quickly grasp the idea not like a “Yes Man” but really understood the artistic and logistic aspects of the idea. He also came up with plans from the lighting and lay-out to the art that should be displayed, always making my vision better. After listening to him, I must admit I was pretty blown away too.

Mr. Lewis is a rare breed; physical, strong, passionate and super intelligent. Above all that, Mr. Lewis is a phenomenal artist. He had a wide, maliable style and vision that he could translate into illustration, painting, sculpture and even bombing. One of his great talents was being able to see how different media played against each other or could be contrasted with each other to create a cohesive vision. This ability helped to hone my own vision and strengthen it to a degree that would have been impossible without Mr. Lewis.

He knew how to (and was not afraid to ) swing a hammer, use a powered drill and yes most importantly use duck tape, bailing wire and sheet rock screws. There is nothing more frustrating than to ask someone to hang a light and to have to explain every step in minute detail. With Mr. Lewis I would ask him to hang up anything and moments later he would say “Done”. And the good news, it was done right.

Mr. Lewis was the perfect compliment for me. Nothing ever remained the same, different lights, different sound system, different methods of displaying art all of which was challenging and fun in its own right, but also very tiring. Hell, figuring out how to hang a light in a new way was hard! Mr. Lewis was able to get a handle on everything and see exactly what I was trying to achieve. With each event he knew exactly how to present it, somehow just seeing how everything tied together.

He didn’t just help make my job easier, he helped make my vision a reality. I could give him a basic concept and he’d intuit how to put it together, almost instantly. He knew what lights should be used and even which screws would hold the displays better. He was my go-to-guy for anything I could possibly need.

Even when I think back and say “It was really cool when I …” I have to pause, and remember that I had a very small team of amazing people working with me. Even though I was at the center of it all, Mr. Lewis was my secret weapon that helped keep me together. I could never thank him enough for his vision and dedication, for making my events the success they were and making me look good.