After his Sit Down with Phoenix’s family men, Blaz had gotten a taste of what he was really up against if he wanted to follow his vision and make his parties as big as he knew they could be. His bravado got him through a tense situation, but sometimes you need to learn a lesson twice. Thank god for cool friends.

BLAZ:
The mafia shut us down during “FroNDown”, which was part of our Funktion series. We thought that holding the event in an old boxing gym would have given us the cover we needed. Boxing? Mafia? We should have thought that one through. 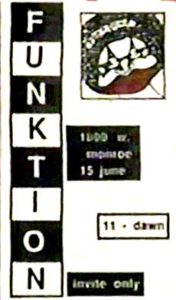 Mr. Lewis and I spent six weeks creating the visuals for FroNDown making it look like the ultimate discotheque. We had a massive pair of Bootsy Collins glasses with murals of Bootsy and his guitar, a huge 3D boom box, swirling giant daisies that rocked back and forth and over 300 balloons that hung from the ceiling.

The center piece was a huge, robotic 6-foot wide Bootsy Collins head with a full Afro. We had fog coming from his mouth. Light beams and strobes shot out from his glasses. The head slowly turned illuminating the space with beams of light, strobes and fog It was really magical. (Writer note: There is a separate part just for all you tech-geeks with all the technically notes on how Blaz and Mr. Lewis made this happen with just $20 worth of material.)

When the crowd started to arrive, I was playing nothing but Parliament and P-Funk to get them in the mood of the theme. Then as the place filled up, the lights went off and Eddie Amador rocked the bass sending everyone into a frenzy. But just when you thought it couldn’t get better, I turned on the robotic Bootsy Collins head and people lost their mind! The giant smiley-faced Bootsy Coollins Afro spun and nodded just like it was dancing to the beat while flashing the crowd in cloudy fog. Truly one of the best displays we ever did.

But the night ended as soon as it began. Some people yelled, the lights came on and Phoenix Police stormed in. Most of the crowd scattered and got away; the police was looking for the organizers and they were tipped to look for me. When we were lead out into a swarm of cruisers and copters, I saw a Cadillac parked down the street with a very heavy man in a Hawaiian shirt watching the circus unfold, laughing to himself. The Mafia had found us, the fat man was singing and the night was done.

When questioned in the cop car I of course denied being the brains behind the event. A detective showed me a zine which had been made by fans of the event. People in the scene had cataloged all our events and put them in comic book form. They found one and said it was proof that I was an organizer. But who ever made that zine (and thank God for you!) I was always listed as the DJ, not the organizer. Their one piece of evidence actually cleared me! So I thought – the detective was “ordered to” shut us down for good, so he hauled me, Eddie, Tall Paul and his friend to the station.

So there we were, sitting in the station with a white and latino cop watching us. Eddie was trying to keep his cool but I could see he was scared. I leaned into him and gave him the advice I would have given myself, “If we get put into general population hit the first person you see as hard as you humanly can!” Eddie just stared at me, even more frightened than before.

Tall Paul and his friend were on the other side of the room, laughing and giggling to each other. The cops came in and start giving Tall Paul and his friend a hard time just because they were gay. Tall Paul stands up and out of nowhere says “I have a joke!” We all quieted down, even the cops listened. “Why do firemen have bigger balls?” The cops stare at him, Eddie and I brace ourselves. “Because they sell more tickets!” Paul laughs as hard as possible. Eddie and I almost piss ourselves, and Tall Paul’s friend is near tears. Even the secretaries are laughing their asses off! Never has my grandfather’s joke sounded so fucking funny. But the cops didn’t find Paul’s sense of humor amusing. They started calling him a “fag” and how he’s going to be raped in prison all day long, his dream come true! But Paul just kept laughing with his friend and ignoring the ignorant and empty threats.

I couldn’t keep quiet though. It’s part of the Cholo code – if you see a homie being put down, you gotta stand up! I look at the cops, one’s white, the other Latino. I call to them “Oh my god! It’s CHPS! But which one’s the Mexican?” Everyone blows up laughing. The Latino cop is fuming and turns to me, so I keep it going. “Hey, I bet you own a white Camero.” He did! Everyone’s dying, even the white cop! “I bet you have a vanity plate that says something like ‘Super Star In a White Car’.” The motherfucker had that abbreviated! Now we’re really losing our shit. But Mr. Mexico is furious. He glares at his partner and both of them come up on me, ready to do God knows what. “Oh, you’re a funny little fucker aren’t you?” hisses the Latino. This was it, I fucked myself because of my big mouth.

Just then as on que the door opens and the detective with the zine walks in. They couldn’t find anything on us, we were free to go. We get up, Tall Paul of course has to cheer as we file out of the room. Just as I was leaving the detective stops me and says “Don’t fool yourself. I know what you’re up to.” At that point I thought “Fuck you looser. I beat your ass!”, but that thought would later come back to haunt me. They were on to us, and I had to be on my game big time.