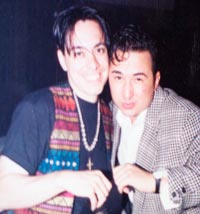 It’s part of the territory; the event scene is rife with drinking, toking and a whole lot of other “recreational” compliments. It’s hard not to get sucked into the party life and all its amenities. Although Blaz and Eddie now encourage each other not to abuse alcohol it wasn’t always the case.

BLAZ:
Jumbo was an event that was held at the River Bottom Lounge (a Mexican – read day laborers’ — dive bar). Eddie and I would show up around 3pm to push tables out of the way, setup speakers and install the visuals. But we were never alone, there was always a company of men at the bar who were seeking a better life than they had south of the border. For a lot of working, middle-class men a cold beer on a hot 110 degree Phoenix day, in a dark air conditioned local bar is a good place to end your day. Even with my limited Spanish and their limited English we always got along, never bothering each other and respectful of each other’s space.

But there’s something you should know about how Mexicans view Mexican-Americans born north of the Rio Grande. Guys like me and Eddie, who are of Latino blood but can’t speak fluent Spanish are considered “low-end” in the eyes of Mexicans; not truly Mexican and not worthy of much respect. There was a time they called us “Chicano” (which at one time was very derogatory) now they call us “Pocho”.

One time Eddie went to the bar to get some water. He came back and said, “Those guys are talking shit, they’re calling us fags and saying we’re a couple of mamma’s boys and Pochos” I said, “I’ll show you who’s a chavala!” So I challenged them to a drinking contest, we’re going to do shots!

So it began. Regardless of what culture you’re a part of, there’s no truer test of manhood than holding your liquor. Eddie and I had a lot of practice, so we were going to show these bastards some pocho pride and drink them under the table.

When we did the first shot I said, “Que es with the lime and sal? You’re Mexicano, I’m a pocho we don’t need any sal or beer!”. Up to that point I had never done a tequila shot (I’m 100% Pocho Y-QUE!!!) and didn’t know what the lime, salt and beer was for. I just thought it looked weak, like they were trying to compensate for the tequila.

There were six of them and only two of us (thank god it was drinking contest and not a fight!) Eddie and I continued to taunt them as we slammed back the t’kill-ya. After the sixth shot, five of them quit. When we got to the ninth there was only one left. Eddie and I did everything we could not to give any indication of the alcohol’s effect. Let me tell you, I was done! That shit was going to knock me the fuck out! As we took the tenth shot, the whole bar was yelling like when the song “Volver Volver” is played at a drunken backyard quinceanera.

They all quit at ten shots. We had “won”. We said heartfelt goodbyes to our vanquished foes. As we walked towards the door I told Eddie “All we have to do is walk out the door and we seal the deal.” We got up on our own two feet, went outside and were greeted by the blistering 110 degree summer heat. As the sun was having its way with us, I thought “I just need to get home and I’ll be alright” . We got home and I fell on the couch and Eddie fell on his bed. Fuck, we still had to turn around a couple hours later, finish setting up and do a full night.

A really cool thing happened though at Jumbo. From that day forward, we would show up and find that all the tables were moved and the speakers were setup for us. Just the week before, we were laughed at and mocked, now we were a part of la familia. Los Pochos De Jumbo represented the Phoenix Underground and earned the respect of the Mexicanos.

We believe that these photos were taken that night.